You are here: Home / About AR Lab

The School of Architecture and Interior Design received the 2016 Provost’s Technology Innovation Award and built the Architectural Robotic Lab (AR Lab). Architectural robotics have become one of the most important fields of architectural research in recent years as they allow the physical construction of complex computational geometries. 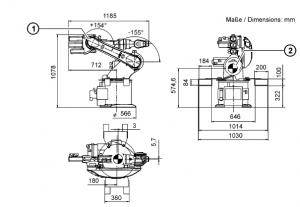 Digital fabrication has been of great interest to architects and fabricators; and advancements in techniques, methods, and tools have greatly shaped the manufacturing process of the built environment. Robotic aided digital fabrication has been the interest of automated construction processes since the start of the early 90’s.  Computer simulations and mathematical models allow researchers to precisely control the robot and the properties of the final product. Building on the principles of digital craft, robotic craft seeks to build on recent advancements by examining the ways in which robotic arms have come to be seen as transcending their traditional role as performers of the monotonous tasks of mass manufacturing pipelines (Gramazio, 2008) and instead be viewed as part of the toolset available for the production of crafted and unique work. Robotic arms act in the same manner as a human arm, where seven degrees of freedom (DOF) are used to rotate, twist, grab, avoid obstacles, and improve accuracy (Cokcan, 2010).  Today, the globalization of technology facilitates new advancements in digital realization (Carlow, 2009) and opens new possibilities for robots to engage in the creation of high craft artefacts and manufacturing of products. Through the Architectural Robotic Lab ( ARL), relationships between craft, art, design, engineering, computer science, and computational robots are examined in order to expand the notion of craft and manufacturing in both digital and analogue processes.

The AR Lab focuses on exploration of new ways of fabrication and material distribution through robot, and improve the teaching and research of digital fabrication in the school of Architecture and Interior Design. First, ARL supports faculty and student to test various materials including clay, cement, silicon, and composite material, which are difficult to handle by the typical 3D printers. Second, the robotic fabrication will allow DAAP faculty to teach computer programming and use scripts to interact with the robot.

AR Lab is supported by the Rapid Prototyping Center (RPC) at the College of DAAP. RPC serves the department of Architecture and Interior Design and is operated by a team of full time staff.  The robot will be housed at DAAP in room 5211 in RPC.